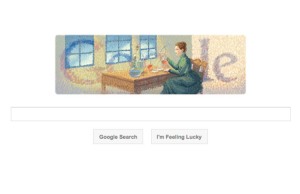 Marie Curie was born in Poland on November the 7th 1867 to Bronisława and Władysław Skłodowski. Her nationality was very important to her, she taught her daughters Polish and regularly visited her homeland. However she was forced to move away at 21 to study in Paris.

It was in Paris that she undertook most of her research, with her husband Pierre Curie. She is known for the discovery not only of two elements, Polonium and Radium and for a theory of radioactivity. It is fantastic to think that she was not only the first woman to win a Nobel prize but the first person ever to win two!

unfortunately Marie Curie was a victim of her discoveries as she died of aplastic anemia, which was brought on by years of exposure to radiation.

Marie Curies discoveries have changed the world as we know it and she has been given so many honours, she was the first woman to be entombed in the Panthéon in Paris, the last person to appear on the 500franc note, the curie (Ci) is a unit of radioactivity and she is definitely worthy of her own element, Curium (although that could also be shared with her husband!)