It’s been a busy couple of days here at the Purcell School and I can hardly believe that our science week is coming to an end. But, what an exciting end it is going to be!

Wednesday started with several house assemblies, the girls house looked at how music changes the mind and some of the neuroscience behind music and how music causes emotions. In the Gardner house assembly, Mr Longstaff discussed a programme that had been on Radio 4 last week which discussed alien life.  The programme mentioned the observation that, even on earth, our form of life is rare and that new, unexpected forms of life are being discovered all the time.  The message of the assembly was that speculation and verbal communication are two of the defining characteristics of humanity.

A typical cardioid polar pattern on a polar graph.

Science continues to be included in many academic lessons.

Mr G took his music tech class through the acoustics of sound and sound waves before looking at microphone specs with A2. In particular the A2 group looked at frequency response, proximity effect, polar patterns. Dynamic and PZM Mics. Following this they spent time looked at types of synthesis including granular, wavetable and physical modelling (with the karplus strong algorithm). With the AS class the group covered EQ , gates and compressors and were introduced to the scientific language and keywords involved with sound production. Including: threshold, RMS, decibel, band pass, shelving, high and low pass filters, input to output ratio, hysterisis.

In French lessons, the lower school took part in a science based quiz, they had to use the internet to find the answers to questions like the following.

The highlight of the week for me took place at the lunchtime recital. With a science themed concert, pupils performed a number of pieces with a link to something scientific! 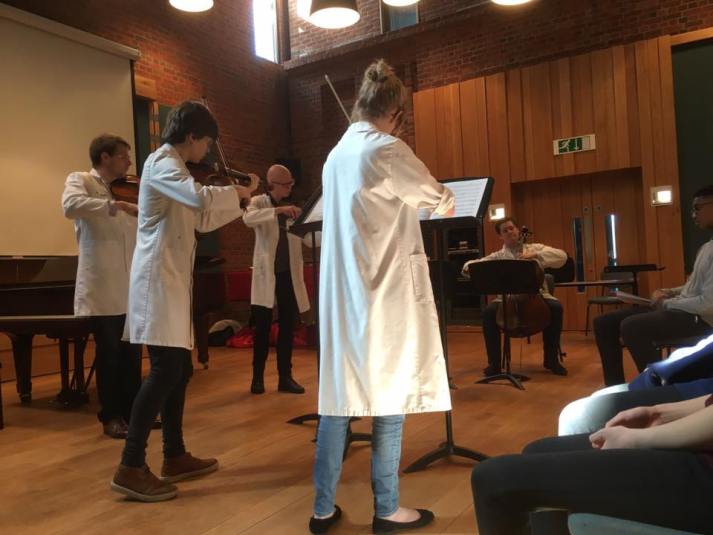 Mathematics featured strongly in the concert with a performance of a Bach’s fugue. This showed off the power of symmetry and was arranged for Oboe, Trumpet, French Horn and Cello by a student, this was followed by a bach Prelude arranged for violin and cello and, to end the concert, the sixth Form Scientists dressed in white coats and goggles performed the first movement of the Borodin Sextet. Borodin the chemist who worked on aldehydes was also a great composer in his spare time so we thought that this was a perfect opportunity to pay homage to his great chamber works.