Mr Szafranski used science within his year 12 class to look at science communication. They started by establishing the multitude of ways science science is communicated before exploring some science poetry from the book ‘Science Verse’. To finish the group began to explore how they might communicate Photosynthesis to a group of Nursery/Early Primary school children. With a bumblebee narrator (Bob the Bumblebee), Ma Rainey the Cloud, Uncle Steve the Wind, Ma Rainey Jr. (the rain), Flo the Flower and the Great God Sun, they decided to adopt a storytelling mode of communication which they ended up performing to one of the auditionees on their tour around the school!

It was also National Demonstration Day so as someone who can’t resist a bit of chemical performance we showed off a few of my favourite demonstrations. (DO NOT TRY THESE AT HOME- THEY ARE FOR TRAINED PROFESSIONALS ONLY!) The first was to torture a few jelly babies. I use this demonstration to look at how activation energy is required for a reaction. You need to heat Potassium Chlorate (V) – an oxidising agent, until it fuses (turns to a liquid) then carefully add a jellybaby. The result is pretty scary as the jelly baby screams as it’s seemingly burnt alive!

The next demonstration looks at surface area. If you try and light a pile of flour, you will find it rather difficult to do – however hard you heat it, it won’t ignite, char and appear burnt – yes, burst into flames – no. This linsk in with what we know about flour, baking a cake doesn’t result in explosions very often. However, by finely scattering flour over a blowtorch you can ignite it fairly impressively.

Increasing the surface area of flour makes it much easier to burn. #britishscienceweek2017 #demoday

My final demonstration to show how you can change the speed of a reaction looks at concentrations. By increasing the amount of Oxygen things can burn very quickly and easily. I particularly like using magnesium which already burns very fast

Many musicians become injured from time to time. Mrs Upjohn, the school physio, has spent the last 5 years researching playing related injuries and looking at how they can be prevented. As part of this research she has identified a number of risk factors in young people. By educating musicians she has been able to reduce pupils injuries. To help with this she spent the day not only treating patients, but visited every practise session in the day to talk about the physiology of practise and how research can reduce injuries in musicians. Mrs Upjohn showed pupils a number of exercises they can do to reduce their risk of injury. 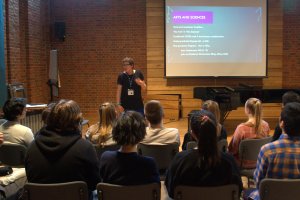 To finish off the day, piano class was taken over by science! Dr Carine Lewis and Mrs Upjohn gave a fascinating pair of lectures and discussions. Mrs Upjohn spoke first and talked about one of her passions, the interface between music and science. The first section looked at the traditional format of a degree (being either an arts or a science degree) and a discussion of whether this was a useful concept. This moved on to look at the various links between science and music. These start with:

One of the important areas that science week has allowed us to look is the opportunity to encourage students to explore further scientific studies and careers. Mrs Upjohn gave a really interesting overview of the degree courses and then further research that can be carried out at a number of institutions including at Cambridge Universities and at the Royal College of Music and Imperial College: Centre for Performance Science.

To end her talk, Mrs Upjohn looked at the history of and the future of emerging technologies in music and performance. One of the first major new technologies and electronic instruments was the Theremin. Sarah explored the physics behind the instrument and the potential for beautiful performances. This went on into the very latest development in technology and performance, live coding or Sonic Pi. Including, the club scene and the outreach that is being undertaken by programmers to show composers and musicians the potential that the technology could bring to create new sounds and possibilities.

Following Mrs Upjohn, Psychologist Dr Carine Lewis spoke about her work and her interests within music. Dr Lewis’ research looked at improvisation in musicians. Dr Lewis started by explaining how scientists investigate ideas and test hypotheses. She then explained her research and findings. it was particularly interesting to hear about how they created their methodology to ensure their results are reliable.

One of Dr lewis’ early interests was in Music Therapy. She helped discuss the reasons why research is important and looked at the links between Parkinson’s disease and the improvements that can be found with various musical interventions. Her latest role is as Research Manager at the National Offender Management Service. Working with offenders sounds very far from her main interests but her interest in music has also played a part. One of her research projects looks at music therapy to help rehabilitate offenders. As music has been shown to improve a person’s ability to communicate, music therapy is believed to help people return into the community.